For about a week I have had a stinky rotten egg smell coming from my laundry room. After a bunch of research online, and trying different things, I was finally able to pinpoint the problem to my washing machine and get rid of the smell.

If your washing machine is starting to smell like rotten eggs, that is usually caused by what is called hydrogen sulfide gas. Hydrogen sulfide gas is the main component in sewer gas, and it is also the byproduct of bacteria metabolism.

What typically causes the hydrogen sulfide gas to occur in your washing machine is most likely because of a build-up of dirt, mold, mildew, and soap that is stuck in the drain plug and or hidden between crevasses of the rubber bellow within your washing machine. The good news is that it’s easy to get rid of by yourself without having to call a professional plumber.

If you have a front load washing machine and you are smelling a rotten egg type of smell, then this could be caused by many different things.

Front-loading washing machines have a rubber boot or bellow similar to the one shown in the photo. From time to time a small object such as a sock or face clothe could end up getting caught inside of this. When that happens, the object sits in there all wet and begins to mildew.

Pull back on the rubber and take a look inside there. You should start checking this area often and give it a good wipe down at least once or twice a week if you do laundry regularly. 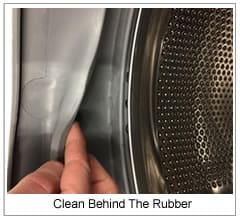 This area around the rubber will often get gummed up with dirt, soap scum, mildew, and mold. Over time this combination will create a bacteria that will build up, and often let off a stinky odor.

After each use, you should leave the door open to the washing machine to give it a chance to air dry. This will help prevent mildew and mold from forming on the bellow. Now if this is not an option for you, then you could always take a rag and give the bellow, and the inside door a good wipe down.

It is recommended that you run your washing machine at least every two months with nothing in it except for bleach in the wash tub, and on the hottest setting, you have. Look for a setting that could be called a Sanitary Cycle, or Clean Cycle, depending on what type of washing machine you have. Doing so will help keep the washing tub, pump and drain lines clean and sanitized.

Sometimes the bellow gets too old, or the mildew/mold combination will get too thick to clean off. If this happens, you might have to look at replacing this part. 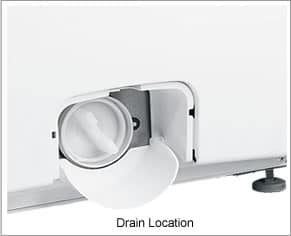 On a lot of front load washers, you should have a drain plug with a filter inside it. Usually, these are located on the bottom front of the appliance, or either on the side or sometimes back of the machine, again at the base. (As seen in the photo)

You might have to remove a cover plate that to get to the drain plug that should pop off. Once you can see the plug, you are going to want to turn the cap off. Do it slowly, and make sure you have a rag to mop up the water that will begin to flow out.

Once you have the plug off, give it a good wipe all around. At this time you might also notice the rotten egg smell has gotten much worse. Reach in the hole and pull out the drain filter inside. You might want to wear some rubber gloves because things could start to get messy.

Next, to the drain hole, you might also have a hose with a plug on the end of it. Pull the hose out a little and remove the cap. Allow any water to flow out.

With the drain filter removed, bang off any slim that is attached into a plastic bag, and then take the filter over to a sink and give it a good cleaning using hot water. Once it’s clean, you shouldn’t be able to smell any more of that rotten egg smell coming off of the filter itself.

Finally, take a glass of hot water and dump it inside the washing machine drum area. You’ll notice that the water will run out of the drain plug hole. Do this about two or three times. If you can still smell a faint hint of rotten eggs, you can try dumping a little bit of white vinegar into the drum and allow that to pour out the drain.

Once you are finished, put the filter back into the drain and tighten the cap back on. Also, put the plug back on the end of the drain hose and push it back into place. You can now set the cover back on and dispose of the plastic bag, preferably in a garbage bin in the garage and out of the house.

You should notice that the rotten egg smell has gone away.

It is recommended that you remove and clean out the filter at least once every four to six months.

Sometimes filters break and need to be replaced. If your screen is cracked, it is better just to replace it. You can find a replacement filter on Amazon for about $10 to $15.

If your washer does not have a filter or a drain plug that is visible, then chances are it’s built internally. The best way to clean these is to run your washer in the self-cleaning setting. Your manual should be able to walk you through this process.

If you haven’t run the self-cleaning option in a very long time, then you should try adding some CLR or chlorine bleach alone in the drum and running it through a cycle. Once it’s finished, rerun the machine but this time with 3 cups of distilled vinegar to make sure it’s nice and clean.

If you have a top load washer and you’re smelling a rotten egg odor coming from the machine, this could mean that you have a build up of bacteria in the hidden crevasses within the machine.

#1. With the machine empty, open the lid, set it to the hottest setting, and largest load capacity setting that you have.

#2. While the water is filling up, add one quart of chlorine bleach.

#3. Once the water is finished filling up, close the lid and put it on a spin cycle for about five to ten minutes. After that, let everything sit for an hour.

#4. After an hour has passed, turn the machine on and let it run through its normal cycle.

#5. With the machine finished running, once again open the lid and fill it up with hot water on the largest capacity setting. With the water filling, add three cups of distilled vinegar, and 1/2 cup of baking soda.

#6. Once the water has filled up, close the lid and let it run in a spin cycle for five to ten minutes.

#7. Open the lid and use a rag to wash all around the inside of the washer. Make sure to get under the rim area and around the lint trap.

#8. Let this sit for about an hour, and then run the cycles, as usual, to flush everything out.

The Smell Might Also Be Coming From The Sewer

Take a look at the back of your washing machine and follow the drain hose from the machine to see where it is connected. Typically the hose is connected to a standpipe located next to your laundry sink. You should be able to lift the hose out of the standpipe. With the hose removed, take a sniff inside of the standpipe. You’ll notice right away if the odor is coming from within there.

If it does smell, you might have a dried p-trap, which is allowing sewer gas odor to pass through the pipe and enter your home. You can try to reprime the p-trap by pouring a gallon of water down the standpipe. If this gets rid of the rotten egg odor, then you know it’s a problem with the p-trap. It could be possible that you have a venting problem that is causing the water in the p-trap to be sucked. In this case, you will want to call in a plumber to get this fixed.

Another possibility is that the standpipe itself is dirty or has a clog, that is allowing oror-causing bacteria to grow within it. To clean the standpipe, simply pour a half cup of baking soda down into the pipe, followed by a cup of white vinegar. Allow the mixture to sit for at least 30 minutes to kill the bacteria.

Common Basement Smells and Odors – The Problem and Solution