At the end of a long day, the last thing that you want to find after doing some laundry is a giant puddle of water all over the floor.

Washing machine drains will often overflow because of a clog in the drain standpipe, or the standpipe itself is too small in diameter to handle the amount of water being forced through it. More times than not, the problem is from a clog. Simply snaking the standpipe and or using an enzymatic cleaner product will unblock the clog, allowing the water to drainproperly.

How a Washer Drains

Before we get into what is causing the drain to overflow, let’s take a quick look at how a washer drains.

When the washing machine is washing, the drain pump motor spins counterclockwise and allows the water to recirculate into the machine. When it’s time to drain, the water fills the drain pump, and the motor reverses direction to force the water into the drain hose. As the pump sucks in the air from the drained washing machine, it uses the air pressure to force the water up the drain hose and out of the machine. The water finally exits the hose down a standpipe connected to a laundry sink or connected directly to the home’s drain system, which leads to either a septic tank or the public sewage system.

How To Diagnose The Problem Yourself

To diagnose the problem, you will first need to fill the washing machine with water. Next, turn the dial to the drain setting. Before you begin draining, make sure that you are in a position where you can see down into the standpipe and still have access to immediately shut off the washer once the drain begins to overflow. 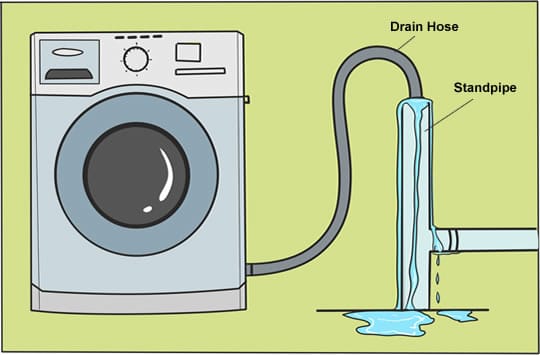 How To Unblock a Washing Machine Standpipe

If you’re washing machine drain is overflowing, then you might have a clog in the standpipe where your drain hose gets connected. To unclog it follow the steps below.

Try taking a garden hose and sticking it down in the standpipe, turned on all the way. Although this will probably not unclog the debris, it will help confirm that the clog is in fact in the standpipe and not in the washing machine drain hose.

If snaking the pipe doesn’t do the trick, you can try using Drano or Liquid Plunger to break away the clog. Follow the instructions on the package so you know how long you should leave the chemicals down the drain before you flush it out.

Using the garden hose again, run water down into the standpipe for a couple of minutes to make sure that the blockage has been removed. Often the clogged object will become attached to the snake and come out, but other times running the water down the drain after will help remove it.

How Do You Unclog a Washing Machine Drain Pipe?

Now and then your washing machine drain pipe could become clogged from dirt, lint, and hair, which will prevent water from flowing through. The good news is that this is fairly easy to fix on your own.

Before you get started to make sure that the washing machine is turned off.

Locate the drain hose in the back of the washing machine. This hose is normally located near the bottom of the machine, and it is generally black. If you follow the hose, it should either lead to a laundry sink, standpipe, floor drain or directly into a PVC pipe.

Using a pair of pliers, pinch the clip that is holding the drain hose to the washing machine. While squeezing the clip, you should be able to pull the drain hose free. 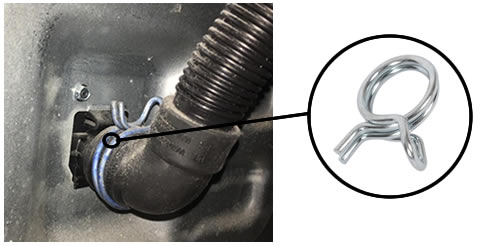 Using a long metal coat hanger or an auger, remove any debris caught in the drain hose. Next, take a garden hose or a bucket of warm water and flush the drain pipe. Straighten the hose and take a flashlight to look through to see if the debris has been removed.

If the clog is big enough, you might need to use a chemical cleaner to help break away the debris.

Once the drain hose is cleared, take your flashlight and look inside of the drain discharge connector on the back of the washing machine. While wearing some rubber gloves, stick your finger in to see if there is anything else blocking the hole, and to pull out any sludge type debris caught inside. 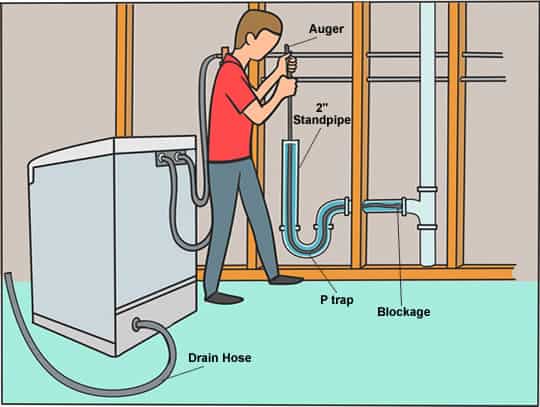 Step 4 – Hook the hose back up

Once you are satisfied that the hose is clear of any debris, you can now re-install it to the back of the washing machine. Again take your pliers and squeeze the metal clip so that you can slide the hose back into place. Once the hose is pushed on as far as it’ll go, let off on squeezing the clip so that it tightens. Give the hose a little tug to ensure that it is attached nice and tight.

Next, place the other end of the hose back where it came from.  Use a zip tie to secure it so that it doesn’t come loose and fall off. If it does, you’ll have a big wet problem to clean up.

Aside from having a clogged standpipe, there are a few other reasons why your washing machine drain might overflow, and some of the other most common reasons are: 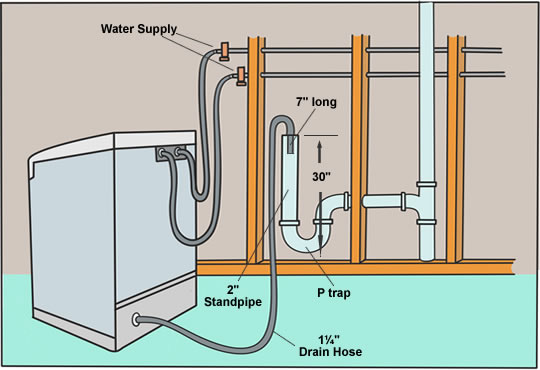 The washing machine drain hose needs to be elevated at least 30″ to 3′ from the base of the washer for it to function properly. Without having the drain hose located high enough, gravity will take over and the water filling the washing machine will run out of the hose and into the floor drain. 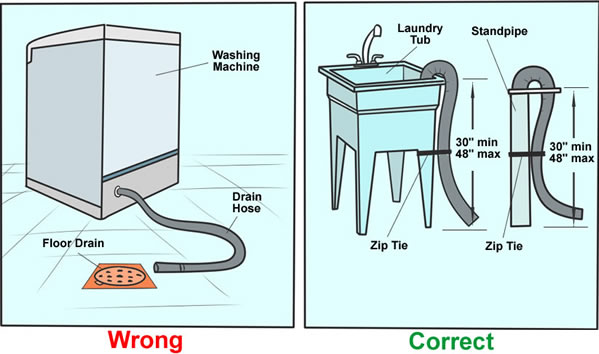 How To Prevent Drain Pipe From Overflowing

Can You Put Drano In Washing Machine Drain?

Drano can cause damage to PVC piping if left sitting for too long as it will soften the plastic piping and eat away at the PVC glue used to connect the pipes.

Please be advised, that because Drano is a chemical, you should also be careful while using it that you do not get any on your skin or breath it in as it can also be harmful to your lungs.