Any homeowner that has a sump pump in their basement will tell you that their worst nightmare is having their sump pump stop working which could result in a flooded basement.

If your sump pump is not working it could mean that there is no power being sent to the unit, the float switch is stuck or damaged, there is a clog in the impeller, or the sump pump itself has burnt out and will need to be replaced.

Whatever the problem might be, the good news is, is that this is something you are able to quickly troubleshoot on your own.

The two most common reasons why a sump pump would stop working; the sump pump either does not turn on at all, or it does turn on, but it does not pump any water. Look below and see what you can do to investigate the problem.

Sump Pump Will Not Turn On

If your sump pump will not turn on, the most common reason for this is due to the unit not receiving any power. Ensure that the sump pump is plugged in, and if it is, double-check the electrical panel to make sure that the fuse or circuit breaker has not been tripped.

If everything looks okay with the power supply, a few other possible causes for the sump pump not to turn on could be:

Sump Pump Runs but Does Not Pump Water

If your sump pump will turn on and sound like it’s working, but it is not removing any water, the most common reason for this is most likely due to a clog in the discharge line or damaged impeller. In this case, disconnect any power going to the sump pump and remove it from the sump pit, so you can safely check for a clog.

A few other places that you might want to check while the sump pump is disconnected and removed from the pit:

What is a Sump Pump?

A sump pump is a small device that is used to empty water from a sump basin, typically found in the basement of homes. It is primarily installed to help keep a building dry by preventing flooding.
This device is a common fixture in most homes, especially those in low areas and those that experience large amounts of rain or snow.

How does it work?

Although it is small in size, this device does a great job in emptying large volumes of water from a flooded basement. It consists of a float valve or pressure sensor, a gravel-bottomed pit, return pipe, and a centrifugal pump. When water flows into the pit, it raises the sensor pressure thus activating the sump pump. For the case of automatic pumps, activation begins immediately when the water enters the pit, thus pumping out the water.

The float valve floats on water and manually moves the arm as the water level rises. You can choose how high the water level will reach before the sensor is activated and turns on. The challenge with manual sump pumps is that they are not very convenient. Automatic sump pumps come with an option that lets you activate in case the sensor or float arm fails.

The sump pump empties water via a centrifugal pump. The motor turns on the impeller (a fan-like device) which then spins forcing water towards the pipe. That creates an area of low pressure at the middle, forcing out water from the pit to move in and fill the created space. The impeller continues to spin, pushing water out via the centrifugal pipe until the sensor switch turns off.

Sump pumps are electrically powered. They come with a grounded outlet, meaning you don’t have to do any special wiring whatsoever. For added safety, it is advisable to install a GFCI since the pump is always in contact with water.

What are the different types of sump pumps?

Sump pumps mainly come in two designs, which range from 1.5 to 3 feet high. They include submersible and pedestal sump pumps. A submersible sump pump comes with a waterproof casing. It has an outlet pipe at the top with a grate at the bottom to prevent the accumulation of debris. It sucks water through the grate then empties it.

A pedestal sump pump resembles a long rod with a huge head. It keeps the pump out of the pit even when it is full of water. It has an inlet pipe deep in the pit which draws water out. Unlike a submersible sump pump, the pedestal has a motor and pump located outside. Therefore, it tends to be much louder. 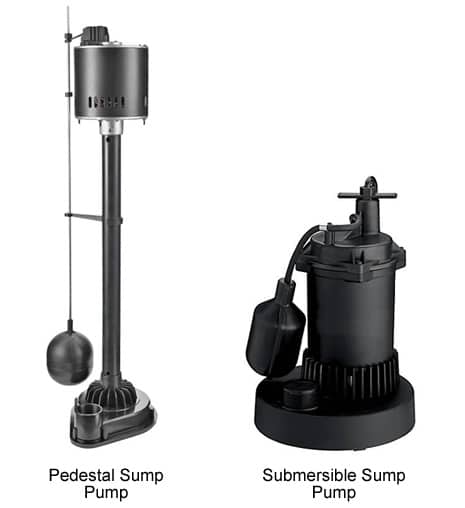 How Long Should a Sump Pumps Last?

A standard sump pump can last between 8 to10 years. With proper annual maintenance, your sump pump could end up lasting up to 20 years.

The maintenance required consists of; pulling the sump pump out of the pit and giving it a good cleaning. Along with a visual inspection to ensure that you do not have any clogs or mechanical problems that will soon show themselves.

Where Can I Buy a Sump Pump?

You can buy a new sump pump fairly inexpensively from Amazon ranging anywhere from $60 to $300, depending on the style, model, and HP. Ideally, you would want to use a sump pump with at least 1/2 HP to 3/4 HP. Also, make sure that the sump pump comes with at least a three-year warranty.

Here is some other retailer who sell sump pump as of the time of this writing.

Can I Install a New Sump Pump Myself?

You will be happy to hear that, Yes, you can install a new sump pump yourself without having to call in a plumber to do the work. It’s a quick and painless procedure.

Step #1 – Start by disconnecting power. To do so unplug the pump from the outlet.

Step #2 – Lay a plastic tarp down on the ground next to the sump pit.

Step #4 – Take your new sump pump and connect the discharge pipe to it.

Step #5– Lower the new unit down into the pit and connect the check valve back on. Ensure that the pump is sitting flat.

Step #6 – Plug the new pump into the outlet. If your float switch has a plug, connect it to the sump pumps plug using the piggyback adaptor.

Step #7 – Dump some water into the pit to ensure that everything is working properly and that the sump pump is turning on when the water reaches the correct height.

Be Notified if Your Sump Pump Stops Working

Most of the time if a sump pump stops working, you might not even be aware that there is a problem until it’s too late.

Luckily, you can install a sump pump failure alarm that will notify you if the water level inside of the pit reaches a senor.  The alarm itself will generally get strapped to the discharge with a float switch attached that goes in the pit.

If you are going to purchase one of these alarms, and I do recommend that all homeowners have one, you should look at buying one that has a built-in rechargeable battery. If your power goes during heavy rainfall, the alarm will still alert you if the water level is reaching a dangerous height in your sump pit.

You can purchase a sump pump failure alarm from Amazon for just under $100. If this little unit saves you from a flooded basement, then it’ll pay for itself 1000 times over again.

Common Reasons Why Basements Flood and How To Prevent It

Sump Pump Running But Not Pumping