One of the most common types of water leaks in a basement ceiling is due to a shower drain leaking. A leaking shower is generally due to plumbers putty that has started to give away around the seals on the shower drain allowing water to seep through the cracks and onto the basement ceiling below.

Why is My Shower Leaking Into Downstairs?

If you have a shower on an upper floor that leaks downstairs into the basement, then there are a few things that may be causing the problem. These include: 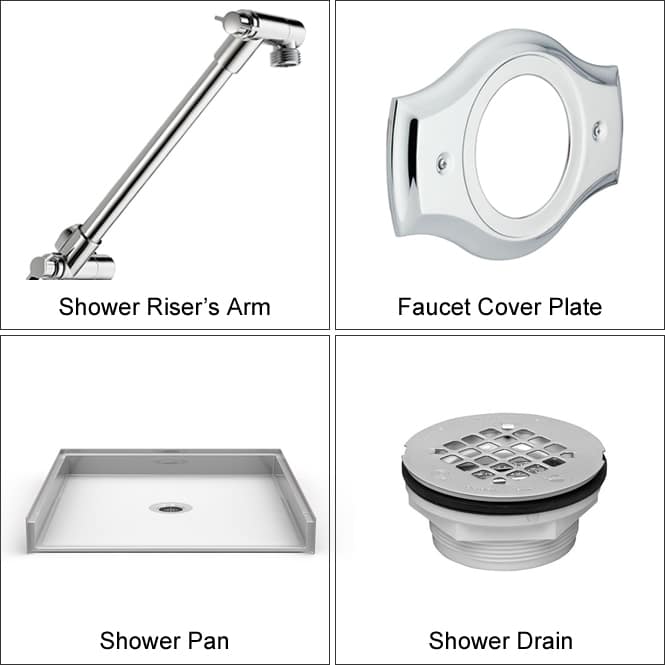 Loose or rusty water pipes can cause water to seep through the ceiling. To fix this issue, it is important to understand where your main water supply shut off is so that you can shut off the water coming into the home. The leaking water pipe should then be tightened or replaced if necessary.

Deteriorated drain pipes can also be the cause of the leak. Drain pipes can age naturally or due to consistent use of hard water. Sometimes the leaks can occur only when you’re taking a shower.

The issue may also be due to other hidden leaks. Some showers have removable access panels located behind the shower wall. Others have drains, shower drains and main drain pipes with attached fixtures that are accessible underneath. If you have eliminated all other possible causes, then you may need to check behind the ceiling drywall by cutting a small hole from below. It will be easy if the drain pipe connection is located just above. Water can also flow down a sloping drain pipe then seep at the lowest point. That might mean that the leak may not be directly above the wet spot. You may consider cutting out some of the ceiling drywall to expose the leaking point.

How To Fix a Leaking Shower Drain

Fixing a leaking shower drain is a simple enough job that even the most novice DIYer can handle on their own. For the job you will need; 2 pairs of needle-nose pliers, water-based silicon, Channellock pliers, replacement rubber gasket washer, and friction washer.

Can I Claim on Home Insurance For Leaking Shower?

Insurance companies typically have different types of coverage forms available, so you will need to read over your policy carefully to see what it will cover. Because the leak is most likely sudden when it happens, it should fall under accidental and unintended.

Generally speaking, a leaking shower is often a plumbers issue and therefore should be covered for the expenses of tearing out the damages and doing the repairs.

Can a Clogged Shower Drain Cause a Leak?

A clogged shower drain may or may not cause a leak. Let me example; The reason for this first depends on the condition of your shower drain.

Clogged drains can cause pipes to leaks if the blockage results in pressure fluctuation. The clog can cause an increase in internal pressure, which then forces the water to find an escape point. If there are any loose spaces like in seals, threads, or other connections, then leaks can occur. If the blockage is extreme, it can even force the pipe to burst. Old and worn-out pipes are at high risk of cracking or bursting. Similarly, pipes with several joints won’t hold up the intense pressure.

Clogged pipes can get corroded when there is a clog and water stays in place for a long period resulting in corrosion. Most water pipes carry corrosive chemicals, including disinfectants and other cleaning compounds. The compounds can react with the pipe, thus weakening the seals around the joints causing leaks to appear. It is even more serious if the pipes are old and less tolerant of pressure.

Moreover, clogs can be hidden like those that occur under the floor or in the line connecting the sewer. The plant roots that are located next to the drainpipe can be attracted to the water clogged in the pipe. The roots can force their way into the pipe resulting in leaks. In other cases, although not so common, a shift in the foundation may cause your drain pipe to flex around the joints. This can lead to a clog which can graduate into a leak with time.

On the other hand, a clog may not cause a leak. This is often seen in toilets and sinks. The water often backs up and overflows, causing flooding downstairs. For shower sinks, then there will be an overflow which leads the water down the drain. If the drain is clogged, then an overflow will occur.

Clogged shower drains can be a nuisance. They can make your home uninhabitable. If the clog is not so serious, then it can be remedied using a plunger or other method. Chronic clogs that can’t respond to clearing may force you to get help from an experienced plumber. The plumber will assess the condition of the clog and the status of the clog to determine the right solution. Whether it is a clogged pipe that has corroded, busted, or broken around the joints, the expert will aid you to remedy the issue.