Have you ever walked into your laundry room and noticed the unpleasant aroma of eggs?  Specifically, the kind of smell reminiscent of old hard-boiled eggs? Luckily for you, with some simple detective work and following your nose, you can probably determine the culprit without incurring too much expense.

If, however, you cannot determine specifically where the smell is coming from, or you’ve tried our simple fixes, it could indicate a more serious problem such as a natural gas leak. If you suspect that you have a natural gas leak, then you need to get everyone out of the home immediately to somewhere safe, then call 911 or the utility company’s emergency number.

Three common and easily fixable reasons for a rotten egg smell might be because: 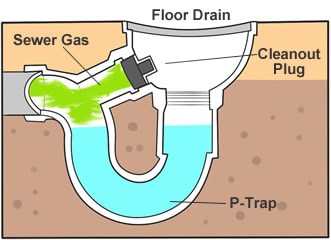 If the smell is from one of these three problems, water, vinegar, baking soda, mineral oil, and a cleanout plug are all you should need to resolve the problem.

Almost all basements come equipped with a floor drain in the laundry room, or utility room, usually near a water heater or washing machine. These floor drains are designed to remove any standing water that is near it by sending that water to the sewer pipes outside of your home.

The basic anatomy of a floor drain is a catch bowl, drainpipe, and a plumbing trap.  In older homes, the drainpipe and catch bowl is made from cast iron, in newer homes, PVC.  If the water level drops in the trap (from evaporation and underuse), sewer gases containing methane (that horrible rotten egg smell) can escape into your home.

Cleanout Plug: Newer drains come equipped with a cleanout plug that bypasses the trap and allows easier access to remove clogs.  This plug acts as a barrier to the escaping sewer gasses.  If the plug is missing (because the drain was serviced, and it wasn’t replaced) then you will have sewer gases coming up from the floor drain through the cleanout access point.

Dried P-trap:  The easiest way to fix a dried-out P-trap is to dump a couple of gallons of water down the drain to restore the water level.  Once that’s done, putting 3 or 4 tablespoons of mineral oil down the drain will create a barrier on top of the water to slow evaporation.

Checking the water level in the drain every couple of months or so and refilling it if necessary should be enough to keep the smell at bay.  If you are unsure if your trap is dry when you remove the strainer (cover plate) you should see sitting water in the drain, if you don’t see any, add water until the level rises and you can see it.

Blocked Washing Machine Pipe: Another culprit is a blocked washing machine pipe, or the drain is plugged up.  Over time things like dirt, hair and soap will begin to build up within the pipes or hidden crevasses of the washing machine causing bacteria to form, this why your Washing machine smells like rotten eggs at times.

If that doesn’t work, you can go to the store and buy a natural enzyme cleaner which is designed to eat away at the organic matter in the drain (hair, soap) over several weeks or months to help keep clogs at bay.  Follow the directions on the bottle for best results.

The natural cleaning product that I have used in my home is called Geezie-Peezie. I’ve only been able to find on it Amazon; my local stores do not carry it (Click here for the current price).

Is The Rotten Egg Smell Dangerous To My Health?

The rotten egg smell that you might be experiencing is most likely hydrogen sulfide (H2S) gas. Hydrogen sulfide occurs naturally in natural gas, and it is also produced by bacterial breakdown of human and animal waste (sewage), as well as from organic materials such as compost waste.

Hydrogen sulfide can be dangerous to your health as well as the health of your pets. Both sewer gas and natural gas have an odor that is described to be like a rotten egg smell and can cause some serious health effects if exposed even at low levels over a long period.

Natural gas by itself does not emit any odor; that is why the utility companies inject a substance called mercaptan. Mercaptan emits a very distinctive smell of rotten eggs or a sulfur type odor.

Low levels of natural gas are not harmful; however, long-term exposure can affect your health. A gas leak can change the amount of oxygen that is in the air, so when you breathe, you are getting less oxygen which will cause you to develop certain symptoms.

Sewer gas comes from decomposing solid waste, which contains methane, hydrogen sulfide, and ammonia which can all be very toxic to humans and pets when inhaled. Exposure to high levels of sewer gas can lead to death. Even low levels of exposure can affect the body.

How Do You Know if You Have a Gas Leak?

One of the most obvious signs of a gas leak is the smell of rotten eggs or sulfur throughout the home. However, a small leak might not emit much of a smell so it might be difficult to know that you have a gas leak. Luckily, there are other signs to look for which can indicate a gas leak.

Some signs to look out for are:

If you’ve had a gas leak for several weeks, you might notice a spike in the gas bill which could indicate something isn’t right.

If you suspect that you do have a gas leak, the first thing you should do is open windows and have everyone (including animals) leave home. Find a safe place where you can call 911, and notify the gas company as well.

Do not try to find the leak yourself because any inexperienced person could cause harm to themselves or others around them.  And whatever you do, do not operate electrical equipment or lighters. Also, do not turn the lights on or off, because even this could create a spark.

Will a Carbon Monoxide Detector Detect a Gas Leak?

A carbon monoxide (CO) detector will not detect the sign of a gas leak, because the two are different types of gases entirely. Carbon monoxide gas is made as a by-product of an incomplete burn. Appliances such as gas fireplaces, clothes dryers, furnaces, and gas stoves produce that by-product. Carbon monoxide is also odorless and flammable.

Natural gas is different from carbon monoxide because it isn’t a by-product, but instead a fuel. Natural gas has an additive called mercaptan that lets off a rotten egg type odor to help detect it in the air.

Since carbon monoxide is a by-product of a burn, and completely odorless, it is considered a greater threat than natural gas, even though natural gas is more volatile.

For extra safety and peace-of-mind,  there are gas detectors available on the market that a homeowner can purchase to help detect a variety of different types of gas leaks. A propane and natural gas detector will only end up costing you under $25 from Amazon (click for current price).

Get Rid of That Rotten Eggs Smell in Your Washing Machine