If your laundry room is starting to fill up with lint, then this is a warning sign that there is something wrong.

Lint in the laundry room could mean a few things. Most commonly it could mean that your vents are full or kinked behind the dryer, and the lint has nowhere else to go. It could also mean that the vent has fallen off the back of the dryer causing the lint to fill the room.

I had an experience a few years ago where I had gone down to the laundry room, and as soon as I stepped foot in the place, I was hit with a cloud of heat. The windows were foggy, and there was a light amount of dust in the air, I had no idea what was happening. When I took a look behind the dryer, I found that the vent had fallen off.

Can Lint in The Dryer Cause a Fire?

Undoubtedly yes, lint in the dryer can cause a fire. It is crucial that you clean the lint trap in-between each load.

It might come to a surprise to you, but the lint trap does not catch all of the lint that is produced during a regular drying cycle. The lint that makes its way past the lint trap often gets caught up inside the dryer, and most often within the vent.

Over time that lint will build up within the vent and inside of the machine to the point where it begins to attach itself to the heating element. When this happens, the lint could cause the dryer to overheat and catch fire.

Lint is an extremely flammable material. Every year nearly 17,000 fires are caused in homes because of failure to properly clean dryer lint from machines and vents.

Here are some signs to look for:

If you experience any of these signs, it is recommended that you take immediate action and thoroughly clean your dryer and ventilation.

How Often Should You Clean a Dryer Vent?

It is recommended that a dryer vent is cleaned out at least once a year, or more depending on how often the dryer gets used. For example, a family of 4 should be able to get away with cleaning out the vents once per year, but a family larger then that should probably look at making sure the vent is cleaned at least twice a year.

If you have any doubt, pull the dryer away from the wall and pop the back vent assembly off and take a look inside both of the vent and dryer exhaust hole with a flashlight to see if they might need a cleaning.

A sign that it might be time to clean out the vent is when you begin to notice that your laundry is starting to take a little longer to dry.

How to Reduce Lint in Dryer

If you are starting to notice that your clothes are covered in lint when you remove them from the dryer, this could be from a few different reasons. One of the more common problems is caused because of the washing machine and has nothing to do with the dryer at all.

Here are some tips to help reduce the lint inside the dryer:

#1. Clean the lint trap in the washing machine – Older washing machines will often have a built-in lint trap. Most of the time the owner doesn’t even know this exists and therefore the trap gets full and causes excess lint on the clothing which transfers over to the dryer.

Newer high-efficiency (HE) washing machines (front load and top load) do not have a built-in lint trap. Instead, these newer washers rely on a self-cleaning setting to wash out hair and lint, but they don’t always work as good as they should.

Take a microfiber cloth and give the inside of the washer a good wipe down. Focus mostly on the rubber gasket that seals the door; this is where most of the lint, hair, and grim tends to hang out.

#2. Clean the lint trap in the dryer – Remove the lint from the lint trap and take a close look at the screen. If you notice that it’s beginning to get clogged by small particles, you can take the screen and run it under warm hotter. Use a fine tipped brush or a toothbrush to scrub the screen and unclog the little holes gently.

If you have any questions about cleaning your lint trap, you could refer to your owners manual on how they recommend cleaning this.

#3. Don’t overload the dryer – When you overload the dryer with too many clothes, everything tends to pack itself together and hold in the lint from being able to get sucked out. Generally, you don’t want to fill the dryer more than 3/4 full, so the contents inside can tumble much more freely.

Lint that is building up behind your dryer is an indication of a clogged dryer vent. When your vent is clogged, it will restrict airflow through the vent and not allow lint to travel to the outside of your home. Because that lint has to go somewhere, it is forced out around the dryer and vent connection, which will accumulate behind your dryer. 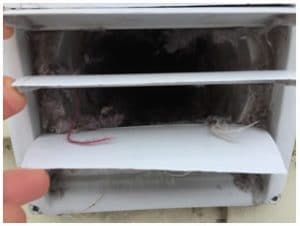 Lint being blown out of the dryer vent is a problem that I have personally had at my home. After doing a lot of research on why this was happening, I was able to find a few possible causes for this.

As you can see there are different theories of why you might be getting lint blowing out of the vent, but experts say, the best way to try stopping this is to get your vents professional cleaned at least once every year.

What I found to help, was that I removed the cover on my dryer and vacuumed out a bunch of lint that had accumulated inside. Now I add cleaning out the inside of the dryer to my yearly routine, and so far I’ve noticed a lot less lint on the exterior of the exhaust vent.

How To Remove Lint From Dryer Vent

Removing lint from your dryer vent is not as difficult as you might think. Here are some steps below to help you. 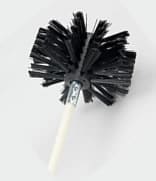 #2. Use a dryer duct cleaning brush to thoroughly do a deep clean to the inside of the dryer vent. These types of brushes can be hooked up to a power drill to get all of the lint removed. Amazon sells these for under $20 as of the time of this article. Click here for the current price.

#3. While you have the dryer vent disconnected, take a vacuum cleaner and suck up all of the lint that has built up on the inside of the dryer vent exhaust. Another spot to vacuum out is where the lint trap goes. There is a brush for this as well on Amazon for under $5. Click here for the current price.

#4. Once you have finished cleaning up all of the lint, you can now reattach the vent to the back of the dryer, and slowly slide the dryer back into place. Be careful not to push it too far back that you kink the vent.