It’s never a good sign when you go into the basement and notice a puddle of water around your water heater.

Worst case scenario, the tank itself is leaking from the bottom due to a build-up of sediment. Anytime that the tank is leaking, the only way to correct this problem is to replace the entire water heater.

But whatever the problem is, you should never ignore a leaking water heater, because even a very small leak could turn into a large problem, fast! 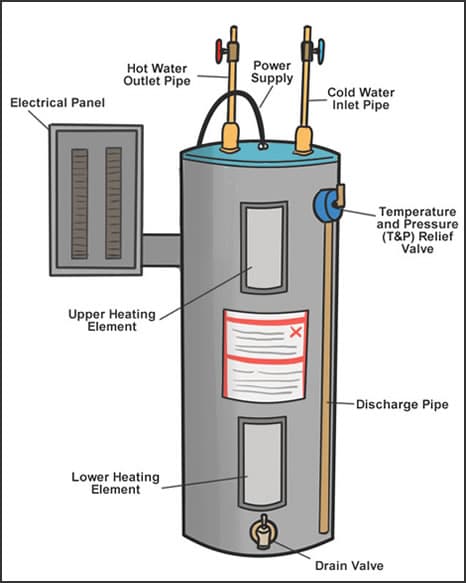 Is My Electric Water Heater Leaking?

There are not too many places on an electric water heater where the leak could be coming from so narrowing the search down can be easy.

This valve is designed to let off pressure from the tank, and if this is leaking, then you may have too much pressure built up inside the tank. Take a look around the valve to ensure that it is watertight and there are no leaks.

Next, follow the directional pipe down to the bottom and stick a finger on the inside of the pipe and feel around for any water. If it is wet, then you know the leak is coming from here. You might be able to take a wrench and tighten the T&P relief valve, but it wouldn’t hurt calling in a professional to have a look.

At the top of the water heater where the inlet and outlet pipes are, check around the joints to see if they are wet and if the water is running out from there. You might be able to tighten these up with a wrench to correct the leak.

The drain valve is used for flushing out the water tank. Take a look around the valve and make sure that it is airtight. If you see any water around the valve, then you can try taking a wrench and tightening the drain valve to see if this stops a leak. If that doesn’t stop the leak, you may need to replace it.

Next, stick your finger on the inside of the drain hole and feel around for wetness. If it is wet, you can try turning the spigot or use a slot headed screwdriver to see if it just needs to be tightened. That might solve the problem, but most of the time, you would have to replace the drain valve.

Take a look at the top of the tank where the inlet and outlet pipes connect to the tank and check if there is water that is coming from the inner tank. Another spot to check if it is the inner tank leaking is to remove the front cover near the bottom of the water heater and feel the insulation on either side. Sometimes you don’t even need to remove this cover to see that water has been leaking from this location. If the installation is wet, this could mean the inner tank is leaking, and the entire tank would have to get replaced.

What To Do If Electric Water Heater Is Leaking

If your electric water heater is leaking, you should never ignore it and hope that it will just go away. If anything the leak will become worse and cause a lot more problems. Once you notice the leak and you have determined that the water is coming from the water heater, you should call a plumber and have them come out as soon as they can.

A very small leak could wait until a plumber comes to investigate the problem, but if you have a large leak, then you can follow the steps below to stop more water from leaking until help arrives.

Aside from the obvious threat of a leaking water heater completely flooding your entire basement, there are a few other dangers that you should know about.

A leaking water heater has the potential to become dangerous if the leak is coming from the pressure relief valve. Generally, when water leaks from this location it could mean that the tank is under extra pressure and by leaking water it is trying to release some of that pressure.

The reason this could become dangerous is that sometimes the homeowner tries to plug the leak or stick a cap over the directional pipe to stop water dripping out. Doing that could cause the water heater to explode. The Myth Busters did a video where they made a water heater explode, and when it did, the water heater launched itself from the basement straight up through the floors and roof.

Another reason why the relief valve could be leaking is that the water temperature has gotten too hot. That will also create extra pressure in the tank, not to mention it will make the water coming out of the faucets extremely hot, which could cause some serious burns to your body. The water temperature on the water heater should stay between 120 to 130 Fahrenheit.

If the cause of the leak is due to a rusty or corroded water tank, then that will contaminate the water distributed throughout the home. Digesting a small amount of rust is not harmful to the human body; however, large amounts can become very dangerous if consumed.

Anytime that a water heater has been leaking for an extended period, you have the possibility of mold growth. Several health concerns come from prolonged exposure to mold, and some symptoms may include throat irritation, wheezing, and difficulty breathing.

How Much Does It Cost To Fix a Leaking Electric Water Heater?

The cost to fix an electric water heater that is leaking can vary depending on where the leak is coming from and who is doing the repair.

If the temperature and pressure (T&P) release valve or the drain valve is leaking, then these are projects that a DIY homeowner could attempt to do on their own as long as they follow all of the proper steps.

A replacement T&P relief valve from Amazon could cost between $10 to $30. A new drain valve could end up costing between $10 to $20. If you choose to have a professional come to your home and replace these parts for you, the cost could range from $50 to $120, depending on who you call.

If the joints are leaking from the inlet or outlet pipe and tightening the connection doesn’t help, then the joints might have to be removed. Some times the thread seal tape needs to be replaced, or the connectors are bad and need to be changed.

This type of repair should be handled by a plumber and could end up costing between $70 to $150 depending on who you call.

If the water tank is leaking, the only way to fix this is to replace the water heater with a new unit completely. A new electric water heater installed plus labor could end up costing you between $700 to $1400 depending on the size you need and who does the install for you.

Common Reasons Why Basements Flood & How To Prevent It