When water begins to leak into your basement between where the bottom of the wall and the floor meet, this is commonly due to what is called hydrostatic pressure. This is when standing water under the foundation begins to rise up and seep through small cracks.

Hydrostatic pressure is the pressure that standing water creates. Typically when the soil surrounding your basement is soaked with water, often after a heavy rainfall or after a lot of snow has melted. A single cubic foot of water weighs 62 pounds, so this means you could have thousands of pounds of water pressure just looking for somewhere to go.

With all of that hydrostatic pressure being forced up against your foundation, the water will begin finding its way through any small cracks or gaps. 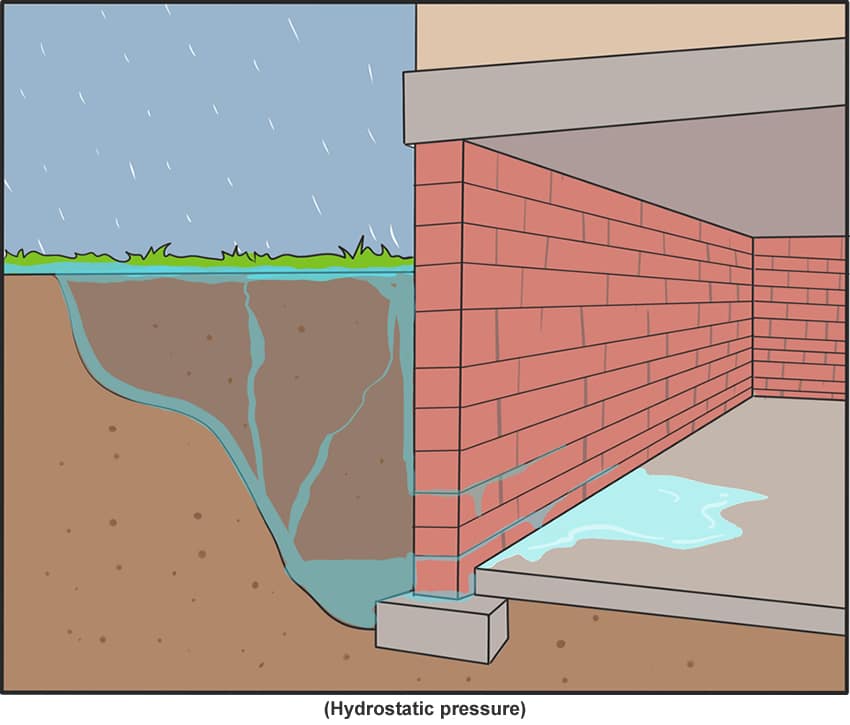 Why is There a Gap Between Basement Wall and Floor?

It is not uncommon for the basement in a home to have a gap between where the floor and the walls meet around the perimeter of the foundation. This gap is called a cove joint, and the reason there is a gap between the wall and the floor is simply because of the way that the foundation of the home got poured.

You see, in the early stages of building a home, the basement is constructed first excavated to the desired depth. The foundation footings normally are designed with a narrow channel along the top called a keyway. Once the footings have had time to cure, the walls get poured with concrete; this will help keep the walls perfectly aligned.

Once the walls have had time to cure, the basement floor gets poured last, because the walls and floor are poured separately, that creates the cove joint.

How to Waterproof The Cove Joint

Now that you know what a cove joint is and why you have a leak coming from it, your first instinct now might be to seal it up to prevent more water from leaking in. You wouldn’t be alone, and many homeowners would do the same thing by using hydraulic cement or some other type of waterproofing sealant. However sealing it this way is not how you would fix the problem, well not for the long term that is.

If you think about, the leak is caused by hydrostatic pressure, which has enough force to pass water through the smallest of openings. By applying a sealant over the top of the cove joint from the inside of the home, this will only cause the water to go around the sealant and look for another way in, or force the sealant material to pop out and allow the water to flow through once again.

The correct way to waterproof the cove joint is by installing a drain tile system embedded in washed stone located underneath the floor. The drain tile system could either get installed on the interior or the exterior of the basement.

Interior: The most common way to install a drain tile system is on the interior. This method involves breaking away the floor 18 inches away from the foundation walls to create a trench that is approximately 12 inches wide.

A layer of washed gravel gets added to the trench first with a perforated drain pipe installed on top of that along the entire distance of the trench which connects to a sump pump pit. More washed gravel is then added to the trench to cover up the drain pipe. Pour concrete then gets added last to seal and conceal the system making it almost invisible after being installed. There is no damage done to the home or landscape.

Once installed, this waterproofing solution will help relieve the hydrostatic pressure and direct that water to a sump pump where it can get discharged away from the foundation. 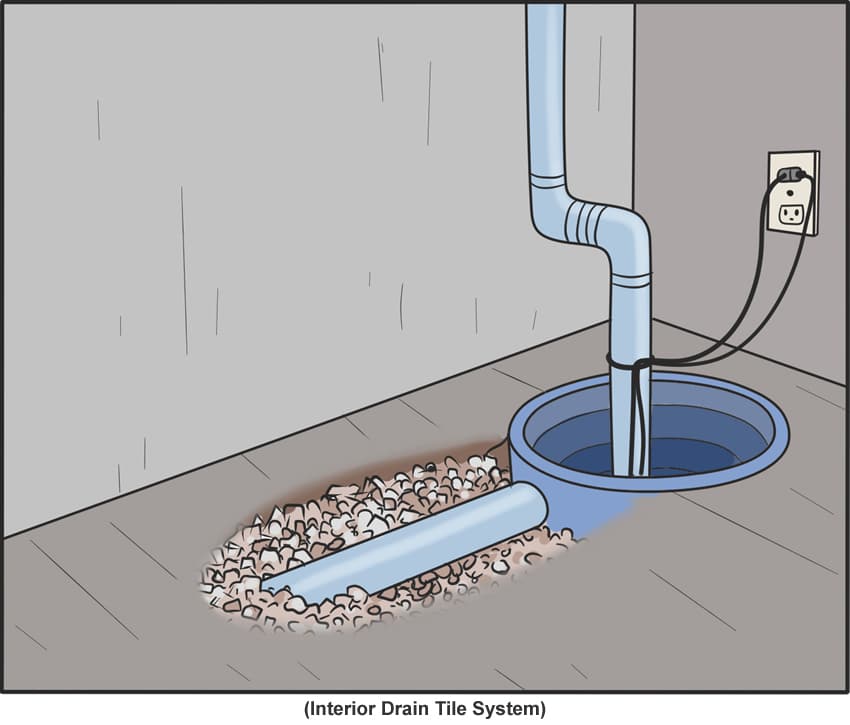 Exterior: An exterior drain tile system works, in the same way, to help relieve hydrostatic pressure and redirect that water, on the outside. To install this type of drain system, you are going to have to excavate the perimeter surrounding the foundation of the home, which makes this option much more expensive and less favorable amongst homeowners.

Before the excavation can get started, everything surrounding the perimeter of the foundation will have to get removed. That includes porches, gardens, stairs, shrubs, patios, masonry work, sections of a driveway, and even an air conditioning unit will need to get moved out of the way.

However if a basement is fully finished, or if somebody is living down there in a basement apartment, then installing the drain tile system on the exterior might be the only option. 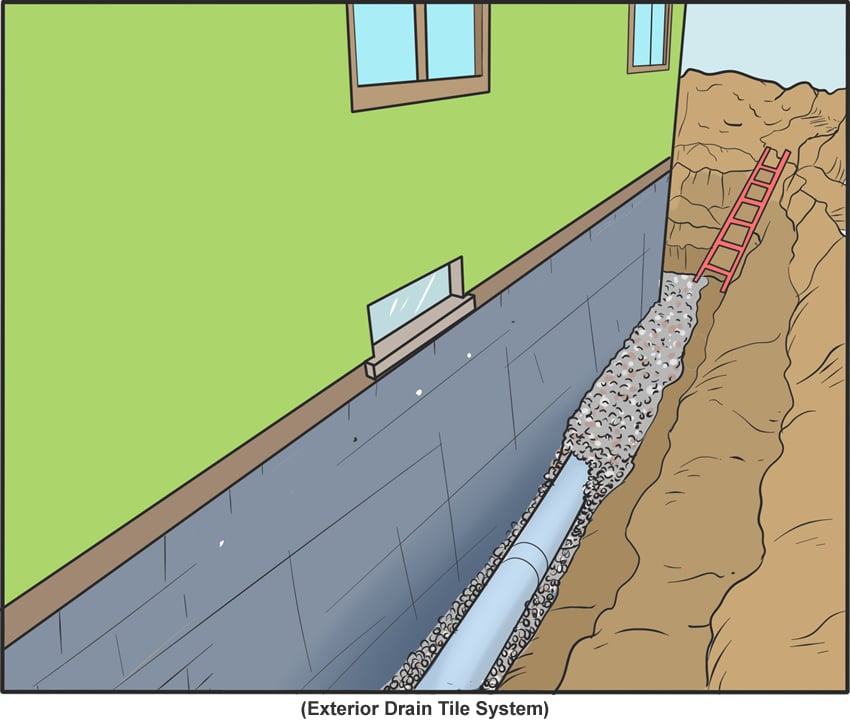 An interior drain tile system could typically get installed within a day or two.

The more expensive option is to install a drain tile system on the exterior of your home. Not only is this more costly, but it is also riskier when done to an existing home. Because the ground around the foundation will have to get removed by excavating the property, it opens the possibility of damaging the foundation of the home.

Typically an exterior drain tile system should be installed to a new home during the construction phase.

How Long Does a Drain Tile System Last?

A properly installed drain tile system could end up lasting you many decades to come. With the modern materials that they use today, the life expectancy of a drain tile or weeping tile will last a very long time.

Even the older clay style weeping tiles would last a long time before they started to deteriorate or become clogged with soil and tree roots.

My House Already Has An Exterior Drain Tile System, So Why Is It Leaking?

The problem is that when an exterior drain tile system gets installed, it is laid around the perimeter on the outside edge of the foundation on a bed of gravel, with more gravel laid on top of the pipe to help with drainage. On top of that gravel, there is a layer of what is called a filter fiber. Over time the filter fiber could easily clog. Sometimes there is no filter fiber added, and when that happens, the pipes will still end up clogging with time.

The only way to service an exterior drain tile system is to excavate the perimeter next to the foundation, making it a very difficult task to “service.”

Who Do You Call To Fix A Leak In The Cove Joint?

If you are having problems with the cove joint leaking, you should seek the help of a professional basement waterproofing contractor. They will be able to examine the problem and determine the best course of action to stop the leak permanently.

Common Reason Why Basements Flood & How To Prevent It